Trisquel Taranis is here, including a MINI edition!

After a great job done during several months by Rubén and the rest of the Trisquel team, the long-waited Trisquel 4.0 Taranis” was published during the Software Freedom Day.

This new release of Trisquel is based on Ubuntu 10.04 “Lucid”, and provides a fully-free distribution of GNU/Linux, running the 100% free Linux-libre 2.6.32 kernel. This release comes in two different primary versions, the “Standard Edition” and the “Mini Edition”.

The “Standard Edition” is meant for standard desktop computers, and includes:

The “Mini Edition”, focused on computers with CPU/RAM limitations like Netbooks, includes:

I’ve been using Trisquel Taranis Standard Edition since some months ago, while it was not even in beta stage; but also wanted to check the look and feel and performance of the Mini version, so I decided to try it in a VM.

The boot menu when installing Trisquel Taranis is really appealing: 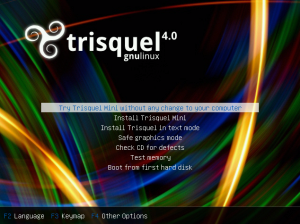 Remember that you can try Trisquel GNU/Linux without installing it!

This is the initial look and feel of Trisquel Taranis Mini after installing it and logging in the user account. Note to Windows users, what’s the difference between a fresh Windows installation and a GNU/Linux installation? Just check the image…

Answer: The “welcome” popup in GNU/Linux tells you about new software updates, it doesn’t tell you “Your computer is at risk!!!” because you didn’t install the antivirus or whatever. GNU/Linux doesn’t need an antivirus, and a fresh install is just SECURE, not like a Windows one.

The lightweight Mini edition will use only ~90MB of RAM when booted, which makes it perfect for netbooks and laptops without much memory:

So, if you want to give it a try, Download Trisquel Taranis! And if you like it, you can also Donate to the project, or buy some nice Trisquel Merchandise…

I’ve been lately packaging the latest releases of several programs for Ubuntu Lucid (or Trisquel Taranis), mainly due to our bleeding-edge requirements in Tracker. You can find them in my personal PPAs in Launchpad:

The real packaging work was done by the Debian guys, of course (kudos to them!); I just prepared the necessary bits to make them get compiled as Ubuntu packages.

In addition to this, during the last GNU Hackers Meeting in The Hague, I also changed the Ubuntu packaging of GNU Psychosynth, the most entertaining music synthesizer I’ve ever played with. The latest packages are now available in the GNU Psychosynth Team’s PPA, and right now only Ubuntu versions >= Lucid will be supported (as they no longer require Andrew Fenn’s Ogre Development PPA).

Oh, and Juan Pedro was able to do another demonstration of GNU Psychosynth during the meeting, which got recorded, so that you can understand what this great program does… watch it and enjoy!
http://audio-video.gnu.org/video/ghm2010/GNU_Psycosynth.ogv

I recently bought a small Asus Mini Nova Lite PX24 and of course, installed GNU/Linux on it. I chose Fedora 10 because at that time, it was the only distro I tested with the required driver for the Wireless interface:
Atheros Communications Inc. AR242x 802.11abg Wireless PCI Express Adapter

I was a Kubuntu fan until release 8.10, which completely destroyed the usability and stability of the distribution when shipping a non-stable version of KDE4. Switched then back to Gnome in Ubuntu 8.10, far more stable than the KDE counterpart. So now that I know that next stable version of Ubuntu also makes the Wireless networking work out-of-the-box, I thought of changing the PX24 back to Ubuntu.

But I won’t… I want to try yum, RH’s system-config-whatever scripts, SELinux… all those things that are not available in Ubuntu.