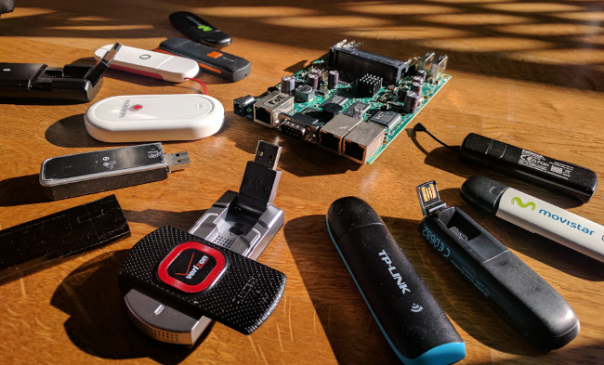 I’ve been lately working on integrating ModemManager in OpenWRT, in order to provide a unique and consolidated way to configure and manage mobile broadband modems (2G, 3G, 4G, Iridium…), all working with netifd.

Along with ModemManager itself, the OpenWRT feed also contains libqmi and libmbim, which provide the qmicli, mbimcli, and soon the qmi-firmware-update utilities. Note that you can also use these command line tools, even if ModemManager is running, via the qmi-proxy and mbim-proxy setups (i.e. just adding -p to the qmicli or mbimcli commands).

This is not the first time I’ve tried to do this; but this time I believe it is a much more complete setup and likely ready for others to play with it. You can jump to the modemmanager-openwrt bitbucket repository and follow the instructions to include it in your OpenWRT builds:

The following sections try to get into a bit more detail of which were the changes required to make all this work.

And of course, thanks to VeloCloud for sponsoring the development of the latest ModemManager features that made this integration possible 🙂

One of the latest biggest features merged in ModemManager was the possibility to run without udev support; i.e. without automatically monitoring the device addition and removals happening in the system.

Instead of using udev, the mmcli command line tool ended up with a new --report-kernel-event that can be used to report the device addition and removals manually, e.g.:

This new way of notifying device events made it very easy to integrate the automatic device discovery supported in ModemManager directly via tty and net hotplug scripts (see mm_report_event()).

With the integration in the hotplug scripts, ModemManager will automatically detect and probe the different ports exposed by the broadband modem devices.

As we’re not using udev when running in OpenWRT, ModemManager includes now a custom generic udev rules parser that uses sysfs properties to process and apply the rules.

The ModemManager daemon is setup to be started and controlled via procd. The init script controlling the startup will also take care of scheduling the re-play of the hotplug events that had earlier triggered --report-kernel-event actions (they’re cached in /tmp); e.g. to cope with events coming before the daemon started or to handle daemon restarts gracefully.

Well, no, I didn’t port ModemManager to use ubus 🙂 If you want to run ModemManager under OpenWRT you’ll also need to have the DBus daemon running.

When using ModemManager, the user shouldn’t need to know the peculiarities of the modem being used: all modems and protocols (QMI, MBIM, Generic AT, vendor-specific AT…) are all managed via the same single DBus interfaces. All the modem control commands are internal to ModemManager, and the only additional considerations needed are related to how to setup the network interface once the modem is connected, e.g.:

The following snippet shows an example interface configuration to set in /etc/config/network.

The settings currently supported are the following ones:

As you can see, the configuration can be used for any kind of modem device, regardless of what control protocol it uses, which interfaces are exposed, or how the connection is established. The settings are currently only IPv4 only, but adding IPv6 support shouldn’t be a big issue, patches welcome 🙂

The main purpose of using a mobile broadband modem is of course the connectivity itself, but it also may provide many more features. ModemManager provides specific interfaces and mmcli actions for the secondary features which are also available in the OpenWRT integration, including:

Worth noting that not all these features are available for all modem types (e.g. SMS messaging is available for most devices, but OMA DM is only supported in QMI based modems).

You can now have your 2G/3G/4G mobile broadband modems managed with ModemManager and netifd in your OpenWRT based system. 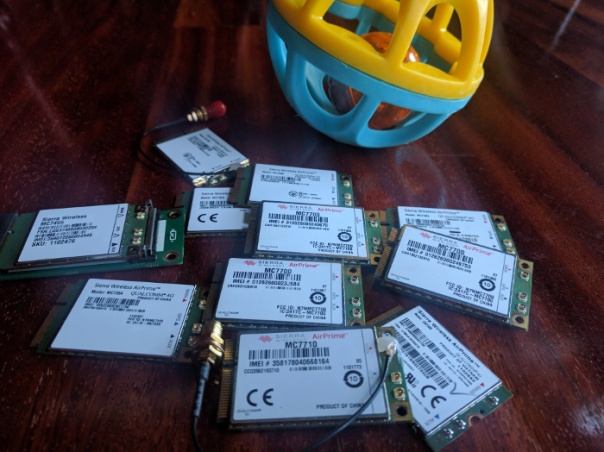 One of the key reasons to keep using the out-of-tree Sierra GobiNet drivers and GobiAPI was that upgrading firmware in the WWAN modules was supported out of the box, while we didn’t have any way to do so with qmi_wwan in the upstream kernel and libqmi.

I’m glad to say that this is no longer the case; as we already have a new working solution in the aleksander/qmi-firmware-update branch in the upstream libqmi git repository, which will be released in the next major libqmi release. Check it out!

The new tool is named, no surprise, qmi-firmware-update; and allows upgrading firmware for Qualcomm based Sierra Wireless devices (e.g. MC7700, MC7710, MC7304, MC7354, MC7330, MC7444…). I’ve personally not tested any other device or manufacturer yet, so won’t say we support others just yet.

This work wouldn’t have been possible without Bjørn Mork‘s swi-update program, which already contained most of the bits and pieces for the QDL download session management, we all owe him quite some virtual beers. And thanks also to Zodiac Inflight Innovations for sponsoring this work!

The upgrade process for Sierra Wireless SWI9200 devices (already flagged as EOL, but still used in thousands of places) is very straightforward:

The new qmi-firmware-update tool supports all these steps just by running one single command as follows:

The upgrade process for Sierra Wireless SWI9x15 devices is a bit more complex, as these devices support and require the QMI DMS Set/Get Firmware Preference commands to initiate the download. The steps would be:

Again, the new qmi-firmware-update tool supports all these steps just by running one single command as follows:

This previous commands will analyze each firmware image provided and will extract the firmware version, config version and carrier so that the user doesn’t need to explicitly provide them (although there are also options to do that if needed).

The upgrade process for Sierra Wireless SWI9x30 devices is equivalent to the one used for SWI9x15. One of the main differences, though, is that SWI9x15 devices seem to only allow one pair of modem+pri images (system+config) installed in the system, while the SWI9x30 allows the user to download multiple images and then select them using the QMI DMS List/Select/Delete Stored Image commands.

The SWI9x30 modules may also run in MBIM mode instead of QMI. In this case, the firmware upgrade process is exactly the same as with the SWI9x15 series, but using QMI over MBIM. The qmi-firmware-update program supports this operation with the –device-open-mbim command line argument:

There are multiple ways to select which device is going to be upgraded:

Sierra Wireless provides firmware images for all their SWI9200, SWI9x15 and SWI9x30 modules in their website. Sometimes they do specify “for Linux” (and you would get .cwe, .nvu or .spk images) and sometimes they just provide .exe Windows OS binaries. For the latter, you can just decompress the .exe file e.g. using 7-Zip and get the firmware images that you would use with qmi-firmware-update, e.g.:

No more “which is now the index of this modem…?”

When modems are detected by ModemManager and exposed in DBus, they are assigned an unique DBus object path, with a common prefix and a unique index number, e.g.:

This path is the one used by the mmcli command line tool to operate on a modem, so users can identify the device by the full path or just by the index, e.g. this two calls are totally equivalent:

This logic looks good, except for the fact that there isn’t a fixed DBus object path for each modem detected: i.e. the index given to a device is the next one available, and if the device is power cycled or unplugged and replugged, a different index will be given to it.

Systems like NetworkManager handle this index change gracefully, just by assuming that the exposed device isn’t the same one as the one exposed earlier with a different index. If settings need to be applied to a specific device, they will be stored associated with the EquipmentIdentifier property of the modem, which is the same across reboots (i.e. the IMEI for GSM/UMTS/LTE devices).

The 1.8 stable release of ModemManager will come with support for user-provided names assigned to devices. A use case of this new feature is for example those custom systems where the user would like to assign a name to a device based on the USB port in which it is connected (e.g. assuming the USB hardware layout doesn’t change across reboots).

The user can specify the names (UID, unique IDs) just by tagging in udev the physical device that owns all ports of a modem with the new ID_MM_PHYSDEV_UID property. This tags need to be applied before the ID_MM_CANDIDATE properties, and therefore the rules file should be named before the 80-mm-candidate.rules one, for example like this:

The value of the new ID_MM_PHYSDEV_UID property will be used in the Device property exposed in the DBus object, and can also be used directly in mmcli calls instead of the path or index, e.g.:

Given that the same property value will always be set for the modem in a specific device path, this user provided names may unequivocally identify a specific modem even when the device is power-cycled, unplugged and replugged or even the whole system rebooted.

Binding the property to the device path is just an example of what could be done. There is no restriction on what the logic is to apply the ID_MM_PHYSDEV_UID property, so users may also choose other different approaches.

This support is already in ModemManager git master, and as already said, will be included in the stable 1.8 release, whenever that is.